I’d never heard of Pierse the Plowman before, but it was in the Kaplan list of books to read for the GRE subject test. I soon learned why I’d never heard of it, it was impossible to find. I finally managed to track down a copy of this book on amazon, but there were not many versions to choose from. My library hadn’t heard of it, neither had sparksnotes, and the Wikipedia article was so vague it might as well not exist.

Piers the Plowman was written by William Langland around the same time as the canterbury tales. It is written in unrhymed alliterative verse and divided into sections called passus (steps). The story follows a narcoleptic man named Will who randomly falls asleep and has visions. His visions have a heavy catholic slant as he is guided though his dreams on a quest for Dowel, Dobet, and Dobet (do well, do better, and do best) though the allegorical land of Piers the Plowman. Piers, who is sometimes an allegorical representation of Jesus, teaches that life is best lived poor and pious. They come up against people like Fee, faith, thought, old age, and the good Samaritan. The dreamer is frequently yelled at for misinterpreting the visions. My favorite quote is

“Judge not, that he be not judged.”
“what would be the use if moral law,” replied Good Faith, “if no one stood out against fraud and falsehood.”
(14)

My version is obviously in modern verse. I like that quote, not because I agree with it (I’m pretty anti-judgement), but because that is the first time I’ve ever seen Judge less thou shall be judge NOT be a conversation killer. I’ve never heard a rebuttal for that argument. 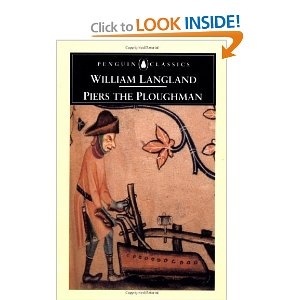