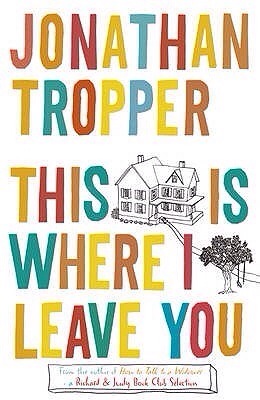 Simultaneously mourning the death of his father and the demise of his marriage, Judd joins the rest of the Foxmans as they reluctantly submit to their patriarch’s dying request: to spend the seven days following the funeral together. In the same house. Like a family.

As the week quickly spins out of control, longstanding grudges resurface, secrets are revealed, and old passions reawakened. For Judd, it’s a weeklong attempt to make sense of the mess his life has become while trying in vain not to get sucked into the regressive battles of his madly dysfunctional family. All of which would be hard enough without the bomb Jen dropped the day Judd’s father died: She’s pregnant.

This Is Where I Leave You is Jonathan Tropper’s most accomplished work to date, a riotously funny, emotionally raw novel about love, marriage, divorce, family, and the ties that bind—whether we like it or not

This was an interesting read. The story sucked me right in and didn’t let me go until the last page. I have to admit, parts of the story reminded me of listening to my great in-laws. It seems the older people get, the more horror stories they become full of. More cautionary tales of unlikely events with horrible consequences. I kind of felt like I was talking to one of them when dealing with a certain neighbor and then a dog. It just seemed….unlikely so much bad stuff would happen on one street. But maybe this is the street The Offspring sang about in “The Kids aren’t Alright.”

I really enjoyed the language and the feel of this book. The observations about loss and life were fantastically cutting. If you enjoy bottle episodes (and I love bottle episodes), this is a good book for you.