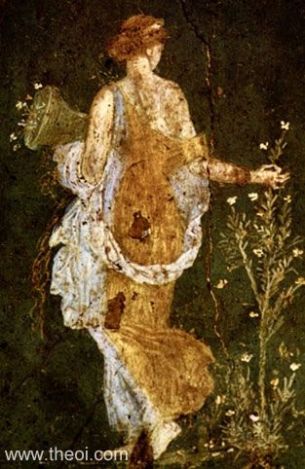 I frowned when I found a scribbled notation on the back of the ticket: narcissus. I glanced at the customer’s name and saw it was one of our regular customers, Flora. I could imagine the conversation that had taken place during that order. Flora’s shrill voice demanding those small white daffodils she’d seen in one of the other arrangements. Mom gently asking if she meant narcissus, a smaller flower frequently confused with daffodils, then the old woman insisting she knew what she was talking about until my mother wrote down the order and penciled in the correction later. For the record, the customer is never right.

“Where’s Chloe?” I asked, dreading the prospect of a customer demanding my attention. The shop was empty now, but I knew the minute Mom left my sight someone would walk in.

The phone beeped in my mom’s hand, reminding her of the caller on hold. She gave it a harried look. “Making deliveries. I don’t expect her back this afternoon.” She tucked my hair behind my ear when I frowned. “The customers won’t bite, I promise.” The phone beeped again and my mother sighed.

In Roman mythology, Flora was an Elysian Nymph and the goddess of flowers. It makes sense in my story that her powers would be derivative from Demeter, so I made her one of Demeter’s priestesses. She’s referenced, but never seen. Chloris, changed to Chloe in my story, is her Greek counterpart. She is the wife of Zephyrus (God of the West Wind), and an exceptionally minor deity.  Zephyrus courted her Boreas style, which is to say he swept down, raped her, and “made good” on the rape by making her his wife. In her own words she “has no complaints about my marriage” (Ovid, Fasti 5. 193 ff (trans.Boyle)).

Prior to her abduction, she did not have powers over nature or flowers. Her first flowers were made from the blood of sad people in unhappy tales (Hyacinth, Narcissus), so she’s obviously not depressed with her lot in life at all.

She was instrumental in the conception of Mars by lending Hera a particular flower to help her conceive (without Jupiter, by the way).

She was also super strategic about how she obtained worship. Flower crowns, gifts of flowers, splashes of colors in the field, all her doing. Seriously, look up the cult of Flora sometime. She was a very self-assured and interesting character, despite being an incredibly minor goddess.

Both versions of Flora’s persona are referenced in Persephone, because I felt bad about giving Persephone absolute domain over their powers.