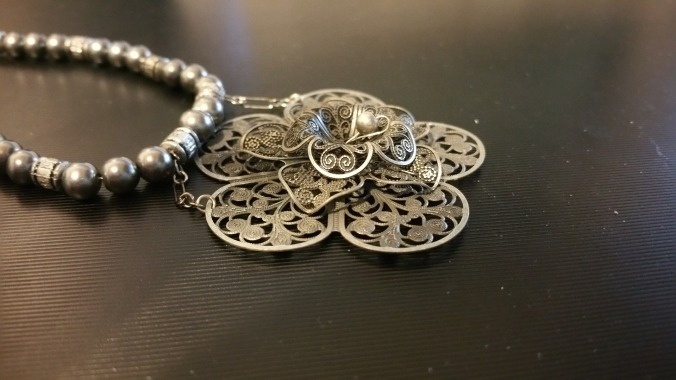 Harmonia (Concordia) was (in most myths) the daughter of Ares and Aphrodite (Love and War) and the goddess of harmony. She’s also considered a goddess of war and marriage. Some versions of the myths list her as a daughter of Zeus and Electra. She was married to Cadmus, the founder of Thebes. All the gods were invited to their wedding, and a bitter Hephaestus (or Europa, or Hera, or Aphrodite), still angry about his wife’s affair, gave her a cursed necklace as a gift. The Necklace of Harmonia brought horrible luck to any who possessed it.

Harmonia’s husband was turned into a snake, and Harmonia was so distraught, that the gods turned her into a snake so the two could be together again. Polynices, son of Oedipus (yes, that one) and Jocasta, inherited the necklace (sometimes it comes with a robe) and gave it to his friend Eriphyle to persuade her husband to rise up against Thebes. This kicked off all the events in the play Seven Against Thebes, which I really do need to cover in another mythology Monday. But hint, hint, everyone dies. The necklace passes from their son to several other less notable mythological figures, causing unspecified trouble along the way, until finally  Amphoterus and Acarnan dedicated the cursed necklace to the temple of Athena. But then a guy named Phallyus stole the necklace to give to his wife, unfortunately, their son went nuts and  burned the house, his family, and their treasures that night, and the necklace has been lost ever since.