Orpheus and Eurydice’s souls poured into my hands. They felt the way candlelight looked. Tenuous and flickering, but aglow with energy that, left uncontrolled, could destroy everything in its path. They resonated with one another. Two parts of a whole, reunited as one.

Joel had been right, or rather, it seemed his long lost myth had been accurate. My mother hadn’t been sure of the origins of that myth. She had little to do with the creation of humans. Her energy had been focused on sustaining them. The souls had been Zeus’ department.

I used Orpheus’ soul as a guide to mold Eurydice’s renewed soul back into her body. His soul flowed effortlessly into her to fill in the missing connections. The souls merged easily, the trouble was getting them to split apart. I pulled more power from the Reapers, shoving each soul back to its rightful place. 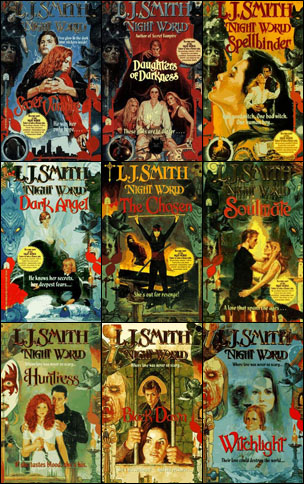 Without a doubt L.J Smith influenced my view on soulmates more than any other writer or bit of media. The silver thread she described at some point in every series she wrote, but particularly in Nightworld is the thing that pops into my head if you say soul mate. I honestly can’t even quantify how much her work influenced mine. I read her books over and over and over again when I was younger. Her words have been hardwired into my DNA.

There’s no reason to include any other sources in this list. If you haven’t read everything there is to read by L.J Smith, do so. Her books don’t stand up to the test of time that well if you read them through a modern sense, but here’s the thing. Young Adult literature has changed. We have Harry Potter to thank for that, but before the Harry Potter series got long and complex, you couldn’t get something of that quality published for children. YA was barely a recognized genre and formula was king. When I (and most other young adult writers of today) was younger, we had a tiny section of the bookstore devoted to YA books. That section held over a hundred babysitter club and sweet valley books, some stuff by Judy Bloom, Deane Coontz, and Caroline B Cooney (but most book stores actually put those with the grown up books, at least here in the south) and then there was a tiny, tiny, tiny bit of shelf space dedicated to the books with dark spines. R.L Stine, Christopher Pike, and L.J Smith were this section, and L. J Smith was the only woman of the big three.  Children’s fiction had a lot more variety as did adult fiction, but I promise you, every female YA author you’ve read has been influenced by L.J Smith, she’s all over Meyer’s work, and I catch references to her all the time in literally everything I read. Read it so you can catch them to. You owe her a debt if you enjoy the supernatural romance genre.