What are my top five favorite couples in fiction? That’s a tough one because there are so many amazing relationships in books and movies. But I’m going to reserve my top five for the relationships I saw that shaped my idea of romance from a very young age up to the most recent couple I’ve really rooted for.

Serena and Darien from Sailor Moon. I spent the vast majority of my young life obsessed, and I mean obsessed, with Sailor Moon. And my little nine-year-old heart throbbed every time Darien came on screen. He was tall, dark, handsome, had ice blue eyes and a major attitude, she’s a short, fluffy blonde who also happens to be a naïve optimist with a core of steel. They’d die for one another and have a bit of an unhealthy obsession with each other, but they both have lives outside of their relationship, filled with actual people. Sound familiar? As an adult, I recognize the many issues in their relationship, but I can’t deny its formative impact on me. Clearly, it’s wormed its way into my head and my fiction.

Julian and Jenny from The Forbidden Games Series. Yes, it’s another Hades/Persephone ish relationship. What can I say, I have a type. And this one has a lot more issues than Serena and Darian, namely that half the couple is evil. But twelve-year-old me loved them.

Cory and Topanga from Boy Meets World. An epic and lasting romance. Happy to see them married now and raising a family. Even if I couldn’t get past the first episode of the new show. 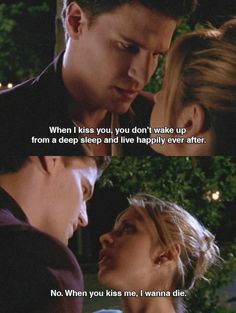 Buffy and Angel from Buffy the Vampire Slayer This one I didn’t see until I hit my teen years, but oh my gosh. The season two finale had teenage me wailing. Can you tell I have a thing for doomed romances? Not to mention tall dark and handsome mystery men with tortured pasts?

The Doctor and Rose from Doctor Who. Like most shows I watch, I saw every episode of Doctor Who on the couch next to my husband, which makes really rooting for a couple a different experience. In fact, having a husband makes really rooting for a couple a different experience. Especially looking at stuff that you used to find romantic because I have such a better idea of what real romance actually looks like than nine-year-old me. So the fact that I really root for Rose and 9 or 10, was really interesting to me because there are elements of this relationship that are present in all the others and there are things that aren’t.