Thanks so much for having me on your blog, Kaitlin. You asked me to talk about one of my favorite myths, and it just so happens to be one of the most popular: the Persephone story.

The Persephone myth was my introduction to Greek mythology. I was in the seventh or eighth grade and found it in my English teacher’s library. From that moment on I was hooked.

As I became older, I wondered how a story about an innocent girl being tricked into marrying the god of the most repulsive realm could possibly have appealed to me. I was a feminist, wasn’t I? This was absurd.

But you know what? Beauty and the Beast became my favorite Disney story, and we all know which Greek myth inspired it. So why would a girl, and, later, a woman, who considered herself to be an advocate for women’s rights, adore a story about a girl being held in captivity until she fell in love with her captor?

After years of therapy–just kidding! After years of self-analysis, I came to this conclusion: It wasn’t Persephone’s (or Belle’s) captivity that allured me; it was the unloved, misunderstood monster who needed the opportunity to be redeemed.

And now when I look back on my young adult novels based on Greek mythology, I see that I tend to take up for those innocent monsters: Medusa, the Minotaur, and even, to some extent, Scylla. But the monster I have come to defend most in my writing is Hades, because, really, if you study the classic myths, he was the most noble of all the gods despite the lot her drew that condemned him to rule the Underworld.

Back then, girls and women were viewed as property, spoils of war, and the caretakers and nurturers for the people with real power. So when Hades asked Zeus if he could have his brother’s daughter for his wife, and Zeus agreed, there was no obligation for Persephone’s wishes to be consulted. The male deities had an agreement, and unlike the one between Tevye and the butcher in Fiddler on the Roof, even a dream about a dead relative couldn’t get Persephone out of it.

My novel, The Gatekeeper’s Bride, set during and after The Trojan War, tells their story as I believe it really happened. In my series, Hades has a saying: “Life isn’t fair, but death is.” My series shows his true nobility–unlike the way Disney portrayed him in the animated film Hercules, in which the lord of the Underworld is conflated with the Satan of hell. 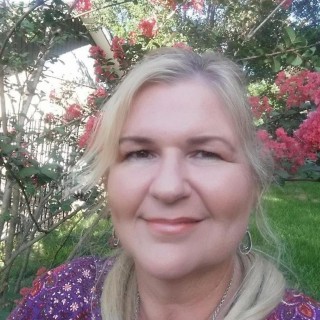 Eva Pohler is the Amazon bestselling author of The Gatekeeper’s Saga, The Purgatorium Series, The Vampires of Athens Series, and The Mystery Book Collection. After teaching writing and literature at a university for over twenty years, she now writes full time in San Antonio, where she lives with her husband and three teenagers. You can email Eva at eva@evapohler.com.