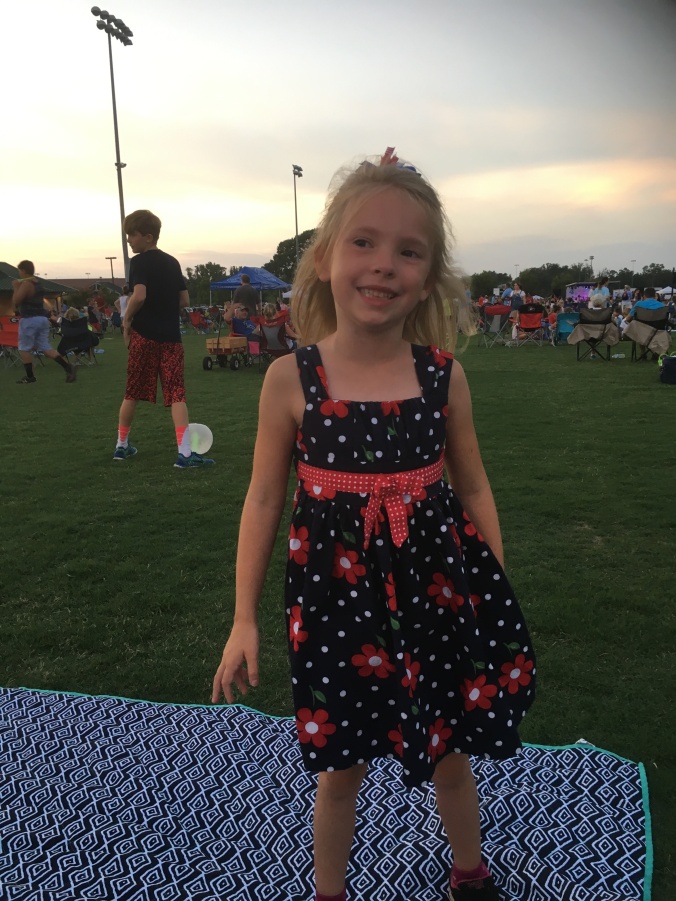 I’m combining the days after recovery into large groups, because otherwise things are going to get pretty repetitive.

Day 3: Day three was pretty rough from a pain perspective. Bella didn’t want to get out of bed for a few hours on Sunday morning, even after her pain meds kicked in. She kept complaining that her head, tummy, and throat hurt. Thanks to the blogs I wrote covering day three post op for me, I knew to expect swelling on these days and I knew eating was going to get harder.

She perked up in the afternoon, and got downright hyper that night. When she finally got to sleep, she slept really well.

Day 4: Another rough morning, but not as bad as yesterday. She’s still complaining about her head and stomach. In the afternoon, she was hit with intense eat pain that the ibuprofen and her pain meds didn’t even touch. We did all the tricks, gum chewing, cold and hot compresses, everything. She was still miserable for the whole day.

That night we did take her to see fireworks and that got her mind off it for a little while, but all round, a rough day.

Day 5: Slept through the night without any pain medicine, but work up the next morning in agony. She took her medicine, but again, the biggest issue, the ear pain, didn’t really seem to be helped by the medicine. She felt better after breakfast (I think the chewing does help), but not by much. Watched a lot of movies today and snuggled.

Day 6-7: Woke up fine, was fine all day except night time

Day 8: Did fine for morning, had a rough afternoon and a rough night. Scabs look like they came off, so that’s to be expected.

Day 9-10: I think we’re over the worst of it. She still hurts sometimes, but mostly at night and by far less than she used to.

For breakfast pretty much every day, Bella ate eggs, greek yogurt, and a banana. That’s a lot of chewing, so I made sure her pain meds had plenty of time to kick in before I fed her breakfast. She tended to eat the yogurt first, so she had something on her stomach. Then take her morning dose of pain killers or ibuprofen, and then by the time I cooked the eggs and got my breakfast on the table, she was ready for her eggs and banana.

For dinner, Bella had soups or mashed potatoes. She doesn’t like soup much, so she didn’t eat much, but by dinner, she wasn’t eating much anyway. It gets harder to chew as the day goes on. I made sure to include a smoothie or a carnation instant breakfast with her dinner so what she drank had some nutritional value.

Getting her to drink was the hardest thing. I ended up just having to do a verbal reminder to drink a sip of water or Gatorade every five to ten minutes. Between meals, she had ice cream or popsicles, so hopefully her throat was staying moist and that was doing something to hydrate her.

For the first three days after surgery, we stayed home. She watched a season of How to Train Your Dragon: Race to the Edge, played minecraft, and School of Dragons. When she got restless with screen time, I had puzzles, board games, worksheets, and girl scout activities to do. The more time went on, the faster she cycled from one to another, getting bored faster and faster.

So on day four, incidentally the fourth of July, we started small outings. She went to a fireworks show on the fourth, and over the next few days we left for quiet, indoor activities like puppet shows, movies, and such.

I’m going to stop blogging now, because at this point it’s getting pretty repetitive, and she should be fully recovered within the next few days. If anything crazy happens, I’ll mention it. But for the purposes of helping parents know what to expect, this should be plenty.

I’m happy to answer any questions.

2 thoughts on “Recovering from a tonsillectomy”